Anyone who knows me will tell you I like ghost stories. I also love a good 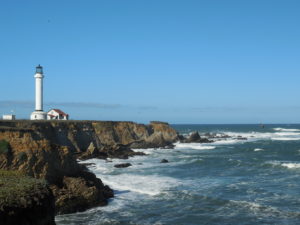 mystery. So when you stick the two together, it’s reading heaven for me. There’s nothing better than an old fashioned whodunit set in a seemingly quiet seaside village inhabited by spirits of the dead. In fact, such a setting reminds me of that trip to Mendocino County that my husband, Trevor, and I made a few years ago—crashing waves, interesting people, historic buildings, and lots of ghosts wandering around. Of course, when I tell people about that trip, no one believes me (except the local parapsychological society, of which I am a proud member). I remember once that I was trying to explain it all at a doctors’ convention, and the attendees looked at me like they thought I had gone round the bend. The medical profession sometimes seems completely devoid of imagination.

Not so with Alexia Gordon, who is a physician and also knows how to put together a rip roaring supernatural mystery. Murder in G Major takes place in the small Irish village of Dunmulloch, where the people have more secrets than a pack of spies. Our heroine is Gethsemane Brown, a talented musician, who comes to Ireland to take on a position as conductor of the Cork Philharmonic only to find the job has been handed away to the music director’s mistress. On top of that, she has lost her luggage. Somehow, she makes her way to Dunmulloch, where she takes up residence at Carraigfaire Cottage and lands a new job as a music teacher at the local boys’ school. It’s all a comedown for her, and she has designs on winning a big competition with the school band in order to gain a conducting gig with an orchestra back in Boston.

But, as is always the case, baffling events intervene. The cottage was the home of a famous modern composer, Eamon McCarthy, and his wife, the poet Orla McCarthy. Orla met her death at the bottom of a cliff near the cottage, and everyone in town believes Eamon pushed her over the edge and then took his own life by drinking poisoned whiskey.

Enter the ghost. Eamon McCarthy still haunts his old home and wants desperately for Gethsemane to clear his name and hopefully reunite him with his wife in the other world. Of course, Gethsemane is pretty skeptical of his existence at first, but after she throws a paperweight at him, she wises up quickly.

“Gethsemane hurled the weight. It sailed through the man’s chest, disappearing into him like a sugar cube into hot coffee, and thudded behind him. She gasped. She’d thrown a low fastball dead center. A direct hit. He should be on the floor.”

It turns out that there are also a lot of really sketchy characters in town, from the aggressive, drunken police inspector who closed the case without much thought to a pair of batty sisters who spent time in the nearby psychiatric facility. But Gethsemane has allies too, including a ne’er-do-well maths teacher at the school, the town’s priest (who saves her from eating a poisoned sandwich served by one of the aforementioned batty sisters), and the head of the new cold case unit at the police station. Despite threats and the hostility of many of the locals who don’t like the idea of the newcomer American stirring up unpleasant old memories, Gethsemane carries on to find the solution.

I particularly liked the creepy old buildings, such as the lighthouse near the cottage and the old mental hospital, located on a rocky hill the townsfolk call Golgotha. Trevor, who’s more up on his biblical history than I am, tells me that Golgotha is the place where Christ was crucified and it means “the place of the skull.” Sounds pretty ominous, doesn’t it?

“She leaned her bicycle against a gnarled tree bordering the overgrown semi-circular drive in front of the former psychiatric hospital and examined the massive brick building, half its windows boarded up, the other half with broken panes of glass looking like so many black eyes A wind sprang up, carrying with it a hint of leather-and-soap. A faint voice suggested—or did she imagine it?—she forget about spooky basements and moth eaten records and do something sensible like ride back to the Mad Rabbit for a drink. She ignored it and approached the abandoned asylum.”

I was a bit surprised with the abrupt ending of Murder in G Major, in which things all come crashing together in kind of a heap of resolutions and loose ends. But apparently there will be a sequel in which some of the ghostly happenings should, hopefully, be tidied up. A little more scene setting, haunting description might have been nice as well. Otherwise I found it to be an entertaining, atmospheric, and wittily written read. It’s just my cup of tea, or as Gethsemane would have, a glass of Waddell and Dobb Double-oaked Twelve-year-old Reserve single barrel bourbon!

Murder in G Major is brand new, released in September, 2016, by Henery Press. It is available from Amazon, Barnes & Noble, and Powell’s Books in hardcover, paperback, and electronic formats. I got mine from the iBooks store, so I could read it on my handy-dandy iPad Mini.

Gabrielle Mochizuki is an ophthalmologist and the heroine of The Mendocino Room series of ghostly mysteries written by Ian G. Wilson. In between adventures, she enjoys penning reviews of supernatural literature for Madame Griselda.