I asked my husband, Trevor, if he had ever read The Invisible Man, and he said he thought Claude Rains was a good actor. I told him that seeing the movie wasn’t the same thing as reading the book, that they took all sorts of liberties 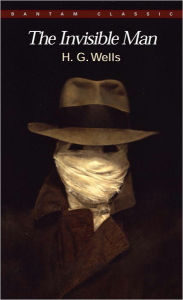 with the characters and plot. He asked me how I knew, since I hadn’t read the book or seen the film. As if they don’t always change things around with movies! So, just to prove a point, I rented The Invisible Man on Netflix and then read the book.

I was right, of course; the two are totally different! For one thing, one of the good guys dies in the film, whereas he didn’t in the book. And for another, they give the Invisible Man a girlfriend in the movie. What kind of woman would be interested in an invisible man, I can’t imagine, but I guess he was visible when they met. But if your boyfriend’s hobby is figuring out how to make himself disappear, I’d say it’s time for a new boyfriend.

Anyway, the book was much more interesting. To give the book its full title, it is called The Invisible Man: A Grotesque Romance, by which I guess you have to take the idea of “romance” as it was once meant: a fanciful story. It all starts with a mysterious stranger arriving in the village of Iping during a snowstorm. His head is swathed in bandages, and he wears dark glasses, a hat, gloves, and a heavy overcoat. I don’t know if I’d call Wells a master of foreshadowing since he gives away a big surprise right there, especially since he titled the book The Invisible Man. I mean, who else could it be? The stranger takes a room at the local inn and demands that his luggage be brought up from the station. He has huge boxes full of bottles of chemicals and, as soon as he gets them, he sets to work mixing up solutions in the parlor.

All the afternoon he worked with the door locked, and, as Mrs. Hall testifies, for the most part in silence. But once there was a concussion and a sound of bottles ringing together as though the table had been hit, and the smash of a bottle flung violently down, and then a rapid pacing athwart the room.

Having an ill-tempered guest take over your parlor and start performing explosive experiments would be a bit trying. And when he comes up short on the rent, the innkeepers decide he needs to go. He is evicted, there is a fight, and the stranger removes his clothes (guess what—he’s invisible!) and makes his escape. Fortunately, it’s spring by this time, so he doesn’t freeze to death running about the countryside without a stitch of clothing on.

We next catch up with Mr. Marvel, a good natured tramp, who is pondering life by the side of a road, when the Invisible Man shows up (he doesn’t really “show up,” of course). He coerces Marvel into helping him, and they return to Iping to recover some notebooks and divest the vicar of his trousers (although the Invisible Man never seems to put them on). Marvel and the Invisible Man begin a string of robberies, but Marvel is not happy working for a man of such violent and immoral character. So he makes his escape, taking both the notebooks and the spoils of their crimes.

The Invisible Man is understandably unhappy and tears after Marvel with the intent of killing him. There is a fight in another small town, and the Invisible Man is shot, but manages to get away nonetheless. Fortunately for him, a former college friend, Dr. Kemp, lives nearby. We discover that the Invisible Man’s real name is Griffin, and, while recuperating, he tells the story of how he became invisible. It is clear that Griffin is unbalanced, and he reveals his plan to start a “reign of terror.” I wasn’t sure what he hoped to accomplish, other than mayhem and killing, but Kemp decides he has to stop him. Can he do it? I’ll leave it to you to find out.

The Invisible Man is a short book, more of a novella, and was originally serialized in 1897 in Pearson’s Weekly. Like much of Wells’ work, it is a science fiction story, and the science in this case has to do with optics and the concept of reducing the refractive index of a living thing to that of air, hence rendering it invisible. This is done in the book through a combination of chemicals and radiation. Some have said that turning the entire body invisible would mean that a person couldn’t see, since the eyes need to be able to absorb light to function, and becoming invisible by the means described would cause light to pass right through them.

As an ophthalmologist, I find this argument interesting, but I think the point of the story has more to do with Griffin’s lack of morality, that it is a cautionary tale about a scientist without feeling or compassion performing experiments that lead to destructive results. Wells did this in quite a few of his pieces, such as The Time Machine and The Island of Dr. Moreau. Wells lived a long life (1866-1946) and saw a great many advances in technology, some of which led him to believe humanity was in big trouble. God knows what he thought of the atomic bomb, which he lived just long enough to see.

I convinced Trevor to read the book, and he said that a person might confuse an invisible man for a ghost. Once again, I told him they weren’t the same thing at all, but it did get me to thinking that, in some respects, there was a resemblance, albeit superficial. I suppose it’s ironic that the Invisible Man turns visible when he dies rather than turning into an invisible spirit. The Ghost of the Invisible Man? Sounds like a sequel . . .

The Invisible Man is available just about everywhere, including the usual suspects, Amazon, Barnes & Noble, Powell’s, and Project Gutenberg. You may, if you have a tablet, find Project Gutenberg’s free Himalaya Reader to be interesting. They put a lot of effort into making the page turning effects pretty slick, and you can download Gutenberg books right into the reader so you don’t have to worry about mobis or epubs. But my favorite is a 1983 Bantam Classic paperback with a painting of a man in bandages and a hat and overcoat on the cover. It’s like the Invisible Man was sitting for a portrait! Now that opens up a whole new realm of speculation, doesn’t it? Happy Reading!