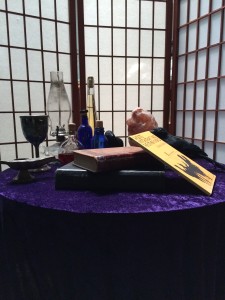 Mendocino Room and its sequels:

Trevor Atherton: A furniture restorer who currently resides with his wife, Gabrielle, in the gold rush town of Nevada City, located in the Sierra Nevada foothills of California. He has a skeptical turn of mind, especially when it comes to ghosts, though his experiences with Gabrielle have made him question this stance. He was injured in a rock climbing accident a number of years ago, one that killed his best friend and climbing partner, Lalo.

Dr. Gabrielle Mochizuki: A Nevada City ophthalmologist and wife of Trevor. She is an enthusiastic devotee of ghosts, ghost stories, and adventures that take the couple into contact with supernatural phenomena. A specialist in laser assisted surgeries, she grew up in Marin County, California, moved to New Orleans to study medicine at Tulane, and returned to California to practice. The couple met under unusual circumstances in Sacramento before marrying and moving to Nevada City.

Madame Griselda: A noted California medium, although her expertise seems to extend to almost any area of the supernatural, from holding séances to locating legendary aquatic beasts in lakes. She is the proprietor of Madame Griselda Incorporated, Psychic and Mediumistic Services, located in Nevada City, though she travels throughout the world to consult on unexplained phenomena.

Waters: Madame Griselda’s supercompetent English butler and personal assistant. His knowledge is vast and abilities many.

Guadalupe Perez: The former underbutler at the estate of billionaire Tucker Underwood. Experienced at household maintenance and fixing automobiles, her insubordinate attitude got her into frequent trouble with her superior at the estate.

Lalo: Is he a ghost or is he a hallucination? Trevor’s best friend, killed in a climbing accident. Originally from Spain, his full name is Eduardo Sandoval Ibarra. He was a fine athlete, having participated in the Tour de France. He studied at Stanford and was a much respected translator of Spanish language literature.