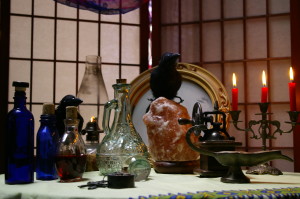 on the supernatural forever.

The CD was playing and the beer in the refrigerator was calling. Having acquired so much information from my phone conversation, I felt satisfied and figured I deserved a break. But first, I unlocked a small drawer in my workbench. Pushing aside a bag of weed, I found my secret stash of cigars. Real ones, not cigarillos.

“Damn right,” Lalo said from behind me, “have a cigar—screw her. In fact, I’ll have one, too.”

“Listen, amigo. You need to take a firm hand with women. Otherwise they’ll walk all over you. I think it’s high time you had a decent smoke, but look at you—you’re still doing it in secret. If you really wanted to show who wears the pants around here, you’d tell her to do the cooking and cleaning and mind her own business.”

I smiled. “She can’t cook. She made tuna casserole once and because we were out of tuna, she put sardines and anchovies in instead.”

“Hmm. You might have a point there. But she should clean, at least.”

“She does the bathrooms, I do the cooking and dishes, and we share the rest of the house and the laundry. Seems fair to me.”

“You have a funny idea of fairness. You’re doing all the daily work, and she’s only doing part of the weekly stuff. Besides, she always invents some excuse to get out of doing housework.”

“True, but she works hard during the week.”

“All work and no play . . . Look after yourself. Let’s have a smoke and a drink. Behave like men. It’ll make your johnson bigger.”

“What’s your pleasure?” I waved at the open drawer.

“How you can stand those cheapo JM’s Dominicans is beyond me. Give me the Graycliff.”

Trust Lalo to pick the most expensive cigar in the drawer. It was my last Profesionale. I selected one of the JM’s, which I thought were a good value and a nice light smoke. We wandered out to the little patio off the basement and parked ourselves in a pair of Adirondack chairs. The weather had cleared, and it had warmed to almost seventy degrees, according to the rusty thermometer on the doorframe. I had put on my jacket, but I barely needed it.

Lalo always made a great production out of clipping his cigars, pushing back his sleeves and flourishing the cutter in a dramatic arc before setting to work. We lit up, and I opened a beer for myself. I offered one to Lalo, but he waved it aside. Maybe hallucinations didn’t drink.

Lalo never removed the band from his cigars until the last possible moment. I’d heard that was considered flaunting your good taste, but Lalo had always flaunted something, whether it was his looks, his black Alfa Romeo 2600 Spider, or his taste in cigars.

About two hours later, I was on my fourth beer and second cigar. I looked down at Gabrielle’s rose garden, now in bloom around the old apple tree, and stretched my legs. I could hear “My Favorite Things” playing through the open door. I felt good, tingly warm and relaxed with a slight head rush.

“What the hell are you doing?” I started as I heard Gabrielle’s demanding voice behind me.

“Wait, you can’t just leave me,” I whispered.

“She’s your wife,” he said, evaporating.