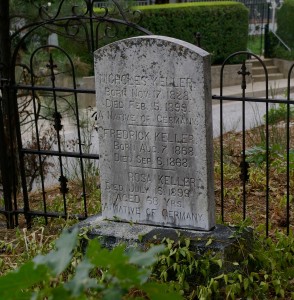 hands of a mysterious woman in a mirror, the couple must call in Madame Griselda to rid Nevada City of a much more serious threat.

Gabrielle guessed that Esmond would have a protective effect on the second bedroom (he had reinstalled himself in the sconces over the fireplace), and she may have been right. In any event, after a half hour of listening for strange sounds in the night and hearing none, we both fell fast asleep.

We were awakened before sunrise by the roar of landscaping equipment. It was dark outside, but as I struggled out of bed and staggered to the window, I could make out a group of workers with headlamped helmets moving around the yard. Some of them were cutting down the boxwood hedges at the foot of the house. I sprinted down the stairs, flinging open the door and rushing onto the front path, where I nearly smashed into a miner hatted Madame Griselda, who was sitting in a large, sagging director’s chair and sipping coffee from the cup top of a Thermos.

“What the hell is going on?” I demanded.

“All vegetation must be removed eighteen inches away from the foot of the house in order to properly secure the tent.”

“That’s outrageous! Do you have any idea how old some of those hedges are?”

“The shrubs in front of the house were planted approximately fifty years ago.” Noting my surprised expression, she added, “I can tell the age of a plant at a glance, in most cases. One must know a considerable amount about horticulture in my line of business; I am a certified herbalist. You need not concern yourself, Mr. Atherton; everything is being handled in a professional manner.”

Stunned into silence, I watched as a large striped tarp was unfurled from the roof to cover part of the front wall. As the light increased, additional sheets, which I could now see were banded in fluorescent red, yellow, and turquoise, were draped over the rest of the house and secured together at the edges with spring clamps to form a tight fitting skin around the outside of the building. Any hope that I had of the cleansing being performed unobtrusively was dashed. In fact, I could see Mrs. Hubbard, our busybody neighbor, coming onto her porch to watch the activity in her pink terry dressing gown.

Gabrielle, fully clothed and yawning, wandered out forty-five minutes later, just after the tarps over the front porch dropped into place. She emerged from the slit that separated them, it having been left open to allow access to the house.

“Trevor, honestly,” she said, “Standing out here in those disreputable pajama bottoms. What are the neighbors going to think?”

“What are the neighbors going to think about this?” I said, waving at the enveloped house.

“That we’re putting on a circus,” she smiled.

I scowled at her.

“Seriously, go get dressed and have something to eat. I made coffee.”

“An excellent suggestion, my dear,” said Madame Griselda. “A full stomach will make you feel more at peace, Mr. Atherton.”

Back to Series Summary